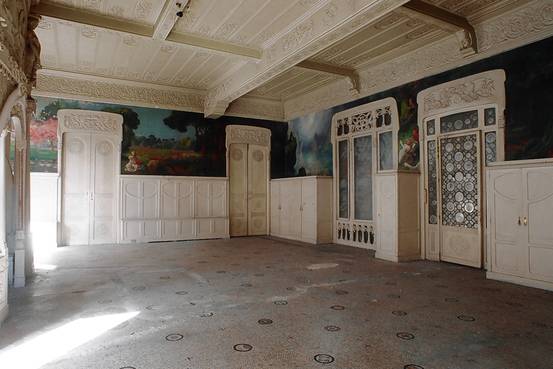 Venture through the vast front door of Casa Burés and a life-size statue of a bear, sadly lacking its front paws (believed to have been stolen by looters), greets visitors at the foot of an ornately carved and cantilevered staircase.

A grand dome of stained glass covers a central atrium, throwing colored light down onto the stonework. And the first-floor entertaining rooms in what was once one of the grandest private homes in Barcelona feature a mass of frescoes, murals, gilded walls, mosaics, marble columns, cornicing, carved paneling, and exquisite bas-relief sculpture.

Casa Burés, located in the upscale Eixample neighborhood, hasn’t been lived in (legally) since the 1980s. Now it is undergoing renovations to create 26 luxury apartments full of the modernista style pioneered by Spain’s totemic architect Antoni Gaudí. And despite Spain’s dismal property market, some foreign buyers are ready to own a piece of Barcelona’s architectural history.

Since the end of February, estate-agent Lucas Fox has sold 10 units in the building to a “united nations” of buyers from the United Kingdom, North America, Argentina, India, Egypt and Spain, who have paid between about $1.18 million and $3.14 million for their apartments.

Superficially, there is little to distinguish Casa Burés, built for textiles magnate Francesc Burés, from the other historic mansions in the neighborhood. “From the outside this is a building which appears very normal,” said architect Juan Trias de Bes, a senior partner at TDB Arquitectura who is overseeing the renovation. “All that is unusual is on the inside.”

Starting in 1900, it took five years for Casa Burés to take shape under the direction of one of Gaudí’s leading collaborators, the master builder Francesc Berenguer i Mestres. (The pair worked together on both the Palace Güell and Sagrada Familia.)

The inspiration was craft and nature,” said Mr. Trias de Bes, pointing to a heavy emphasis on images of animals, flowers, and woodland scenes (plus a full-scale Hansel and Gretel mural in one room), as well as the sheer number of artisan craftsmen required to make such a house.

Casa Burés wasn’t just a family home, but a live-work space. It was once common for even the wealthiest families in Barcelona to treat their properties as business opportunities, and the ground floor housed a textile factory, producing the linens that made Francesc Burés’ fortune. The family lived on the floor above and the floors above were rented out as apartments.

Unfortunately, Mr. Burés was only able to enjoy his modernista home for two years. He died in 1907 and his family took over both the house and his company, Industrias Burés. In the 1980s, their descendants sold the home to the regional government of Catalonia, which held it vacant and allowed it to decay. A short-lived plan to use it as a museum of architecture and urbanism fell victim to the recession, and in December 2014 it was sold to developer Marcus Donaldson, the Barcelona-born son of British parents and partner at Bonavista Developments.

“It was fundamentally a ruin,” said Mr. Donaldson of the state of the building when he first looked around it. “There had been squatters living there who had trashed it, and a lot of the features like very ornate ceilings had been removed or covered over. A lot of the very nice mosaic floors had been cemented over. We are always discovering new things—recently we found original gold-leaf paint under about four layers of different wallpapers.”

As well as restoring original features (the bear statue is to have its paws replaced so that it can fulfil its original function of holding a lamp to light the staircase) the project has involved dividing Casa Burés into five penthouses and 21 apartments. When complete in 2017, it will also have a rooftop swimming pool and, in the basement, a second pool, workout facilities, private dining rooms and a wine cellar.

Right now a retinue of restoration experts continues to work on Casa Burés. Mr. Donaldson has taken the approach of restoring as much of the building’s original fabric as is possible, although he is aware that the end results might be a little too opulent for pared-down modern tastes.

“The thing is, there are original features which are considered to be the most significant and are protected, and there are others which can be altered,” he said. “We wanted to go for a full restoration, but if someone wanted to cover some of it up that would be an option.”